The strawberry blossom weevil, Anthonomus rubi (Herbst) is a small beetle originating in Eurasia, and a known pest on strawberry, raspberry, rose and blackberry.

The pest was first detected in North America in Abbotsford, British Columbia (BC).

This species is currently found in:

Anthonomus rubi has 1 generation per year and overwinters as an adult in dry leaves and plant debris near the soil, most likely away from the strawberry field – possibly in nearby forest areas. Beetles become active in the spring during sunny weather and when soil temperatures reach 10 to 14°C. In the first 2 to 3 weeks, weevils feed on strawberry leaves, chewing small round holes in them. In BC, the beetles are typically found on strawberry plants from May until the end of September.

Mating is in May and the female begins to lay eggs in the closed flower buds once temperatures exceed 18°C. After oviposition, the female makes a few punctures in the pedicel causing the flower to wither. The number of eggs laid per peduncle varies between 1 and 5, but most often 1 or 2 eggs are laid in each bud. The oviposition period lasts 1 to 2 months with a mean fecundity of 157.6 eggs per female. Eggs develop in 5 to 10 days and newly-hatched larvae feed within the damaged bud which is often shed by the plant. The larval development lasts 18 to 22 days and is followed by pupation. Pupation usually happens in the withered buds. Adults emerge about 2 weeks later, tunneling out from the dried flower, to begin feeding on leaves and flower petals.

It is important to note that egg laying in open strawberry flowers, as opposed to buds, has been observed and reported. Between 35 to 40% of observed flowers had no punctures and no apparent damage, but eggs were found inside and larvae developed. The mortality of larvae in open flowers was higher in comparison to individuals in closed buds due to the less-favourable conditions in the open flowers, but some did survive. The strawberries that developed from these flowers were misshapen (Figure 1).

The life cycle in raspberries and roses follows the same pattern as in strawberries but it starts later on in the spring. On Rosa canina (in Russia), eggs develop in 12 to 21 days, larvae in 14 to 31 days and pupae in 4 to 11 days, depending on the temperature.

The major damage of Anthonomus rubi is caused by the adult: females puncturing the pedicel after they oviposit in the unopened flower bud, and feeding punctures by both sexes (Figure 2). The attacked buds often wither and fall off, but in some cases may remain on the plant.

The impact of Anthonomus rubi varies among crops, countries and years. Attacked buds and flowers yield unmarketable fruit or no fruit at all. Yield loss between 1.6% and 80 to 90% was reported on strawberry in certain years. Between 1% and 38% damage was reported on raspberry in different countries depending on the cultivar, year and weather conditions. Up to 75 to 80% damaged buds were recorded on roses. Less information is available on the impact on blackberries – attacks on wild blackberry bushes were reported in Poland and in British Columbia, Canada, where A. rubi was most frequently found on Rubus bifrons (about 60% of all findings).

Adults are small (2.5 to 3.0 mm) black weevils with scattered white to grayish pubescence (Figures 4). Other characteristic features include a bright white patch on the scutellum, thin elongated rostrum and small, sharp femoral tooth. 36 Anthonomus species are known in Canada, and only 4 of them are black: A. corvulus, A. nigrinus, A. rubi, and a colour morph of A. signatus. Of these species, A. corvulus is widespread in Canada, but is smaller (1.5 to 1.9 mm) and is found on Cornus spp. (dogwood). A. nigrinus is reported only in Quebec, on Solanum carolinense. The black morph of A. signatus and A. rubi are found in BC on the same plants (in the family Rosaceae) and it is possible to confuse the 2 species, however A. signatus is smaller (1.5 to 1.9 mm long) and has lines of curved scales on the wing covers (Figure 4).

The egg is oval, white and translucent, about 0.5 mm in diameter. The larva is creamy-white, C-shaped with a light brown head, about 3.5 mm long. The pupa is small, white-yellow, most often found in the remains of the withered bud. 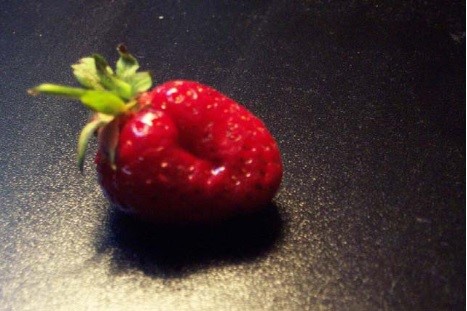 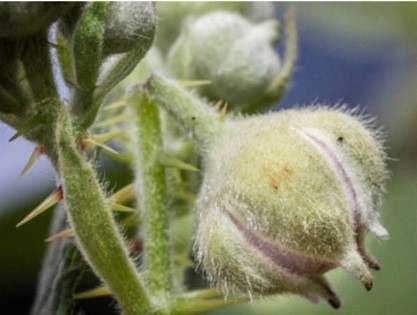 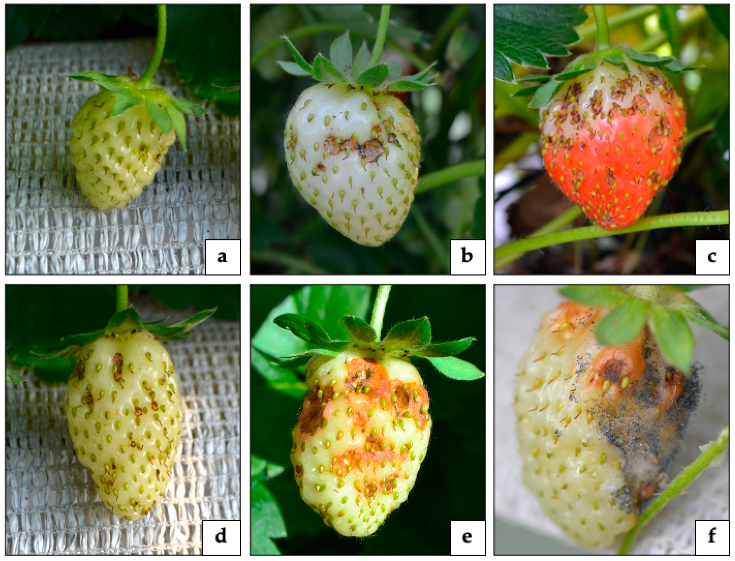 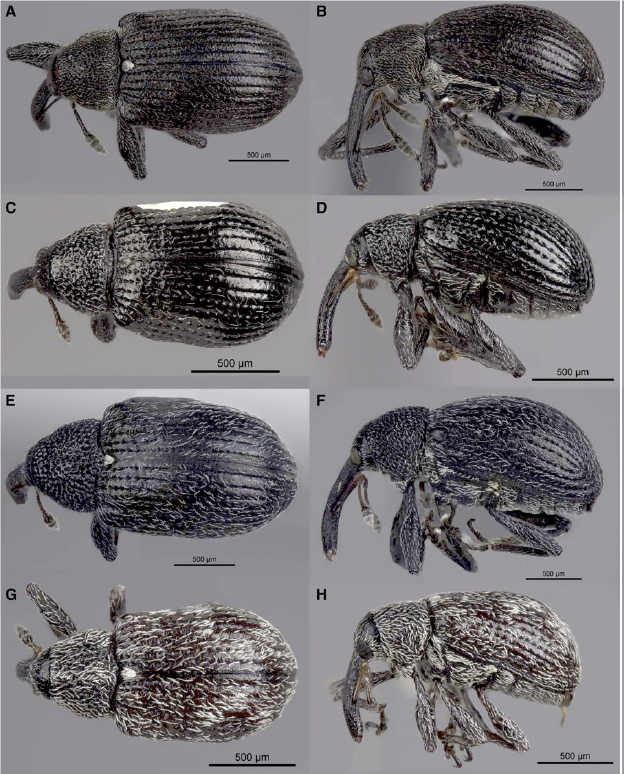