The Canadian Food Inspection Agency (CFIA) is dedicated to safeguarding plants, which helps enhance the health and well-being of Canada's people, environment and economy.

In October 2021, the CFIA confirmed the presence of potato wart in 2 fields on Prince Edward Island (PEI). We immediately initiated an investigation and implemented strict regulatory measures to prevent potential spread. 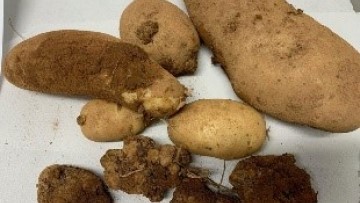 As per the November 21, 2021 Ministerial Order, industry in PEI is required to follow specific inspection requirements for seed, processing and table stock potatoes originating from PEI.

Potato wart poses no threat to human health or food safety. However, it does impact the economic return for potato growers by reducing yield and making potatoes unmarketable.

In Canada and many other countries, potato wart is regulated as a quarantine pest. The CFIA is therefore required to put controls in place that reduce the risk of spreading potato wart both domestically and internationally.

If potato wart is found on a potato tuber or as resting spores in the soil, the find may trigger:

The fungus is extremely persistent and the only efficient way to control it is to prevent the spread into new locations.

The Potato Wart Domestic Long Term Management Plan supports the CFIA's monitoring and management activities for this pest. It includes requirements for regulated fields, such as phytosanitary actions and surveillance, as well as mandatory follow-up actions.

With any finding of potato wart, the CFIA must immediately open an investigation so it can trace all associated fields and any implicated machinery and shared soil because they pose a risk of spreading the fungus if not properly controlled.

We have found potato wart in 34 fields in PEI since 2000. The findings in October 2021 and February 2022 represent the largest area and highest number of associated fields. This increase required the strongest action to date to protect against the further spread of potato wart off PEI.

Soil is a known pathway for potato wart to spread. In fact, the fungus can remain dormant in soil for more than 40 years while it waits for the ideal condition to grow: a cool, wet spring and a nearby potato plant.

Soil sampling is very complex and laborious. In order for test results to be internationally recognized and valid, the samples must be collected by trained CFIA staff and meet specific standards.

As part of its role to protect plant health, the CFIA continues to apply regulatory measures to help prevent the spread of potato wart and to maintain the country's credibility and reputation with trading partners, critical in maintaining market access.

As part of the Agency's ongoing efforts to support compliance to these regulatory measures, CFIA has recently provided an update on compensation for some growers under the Potato Wart Compensation Regulations (PWCR).

To be eligible to apply for compensation, the PWCR requires that a notice to treat, prohibit, restrict or dispose be issued by an inspector. This compensation supports growers who are complying with the important control measures in place to prevent the spread of potato wart and allows them to recover some of their losses. For more information, contact CFIA's Plant Health Offices.

Beyond the PWCR, other financial assistance may be available through programs administered by Agriculture and Agri-Food Canada (AAFC), and, in some cases, provincial or territorial governments. For more information, contact your local AAFC office and/or your provincial/territorial agriculture ministry office.