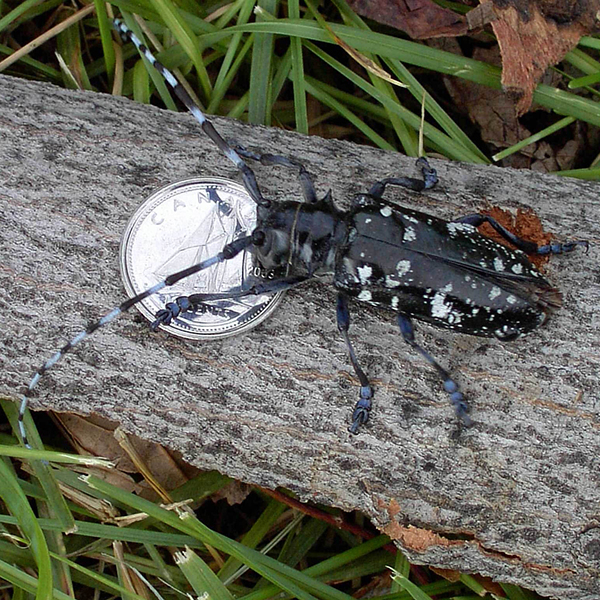 Have you heard the good news? After several years of close monitoring by the Canadian Food Inspection Agency (CFIA), the Asian longhorned beetle has been eradicated in Mississauga and Toronto.

When it was detected in these areas in 2013, the CFIA established a regulated area to prevent the further spread of this pest. The goal was to remove infested trees and restrict the movement of all firewood, and materials like wood chips and nursery stock from certain species of trees, out of that regulated area – and it worked.

The Asian longhorned beetle population has now been eliminated, and the Minister of Agriculture and Agri-Food has declared the regulated area a thing of the past.

This is a timely development as Canada celebrates the United Nation's International Year of Plant Health in 2020. Invasive species and other plant pests damage our crops, ecosystems, forests and natural habitats, which can have damaging effects on food security, as well as our health and wellbeing.

In Canada, the Asian longhorned beetle mainly attacks maple, but also many other trees such as poplar, birch and willow.

The beetles feed on the leaves and twigs of host trees. They chew into the branches and trunk and emerge from the tree, leaving large holes in their path. These highly destructive pests infest and kill healthy trees, devastating urban and rural communities.

Once in a new environment, they can disperse naturally or spread long-distance through the transport of infested wood products, including firewood and logs.

Over the past few years, the CFIA led a large-scale surveillance program aimed at detecting the signs and damage caused by the Asian longhorned beetle.

Mary Orr, a recently retired CFIA Plant Protection Officer who led the Asian longhorned beetle survey efforts, said, "This was a multi-year removal and survey program based on science. It was designed to eliminate the Asian longhorned beetle in Mississauga and Toronto and its threat to our environment and Canada's hardwood lumber, nursery, and maple syrup industries."

Collaboration with federal, provincial and municipal partners was key to eliminating this pest, including the cities of Toronto and Mississauga, the Region of Peel, Natural Resources Canada, Canadian Forest Service, and the Ontario Ministry of Natural Resources and Forestry.

"The various organizations involved provided resources based on their strengths that made our required survey and removal efforts effective and possible," said Orr. This included working with the CFIA to facilitate the eradication survey, sharing scientific information and keeping the public, industry and other stakeholders informed.

Out of sight, not out of mind

There's always a risk that the Asian longhorned beetle could return. In fact, it was originally discovered in Mississauga and Toronto shortly after being declared eradicated in a nearby area.

To combat this threat, the CFIA has a number of requirements in place for bringing wood packaging, wood products and materials for planting into Canada. But we also need your help to protect our forests.

One way you can join the fight against plant pests is by not moving firewood. Although you may not see them, invasive species like the Asian longhorned beetle can easily hide in firewood. When firewood moves, for example from a campground to a cottage, so do the pests that threaten our precious forest resources.

Moving firewood poses a great risk to our economy and environment. A mass infestation can kill trees in our forests and neighbourhoods, affecting air and water quality. It can also lower the property value of your home.

Learn more about the rules for moving firewood and how you can prevent the spread of invasive species.

Learn how to identify plant pests, be on the lookout in your area, and report sightings or signs of an infestation.

Orr said, "Members of the public play an important role in detecting possible future presence of the Asian longhorned beetle. Many eyes surveying trees, in addition to CFIA inspectors, can be very helpful. Know what you are looking for by visiting the CFIA website and becoming familiar with the signs of an Asian longhorned beetle attack, what pest looks like, and which trees are susceptible. Contact the CFIA with insect samples or suspect trees of interest and photos."

Let's protect Canada's trees together! Get in touch with us online or contact your local CFIA office to report a pest.