The Japanese beetle is native to the main islands of Japan, and was first discovered in North America in southern New Jersey in 1916. The first Japanese beetle found Canada was in a tourist's car at Yarmouth, arriving in Nova Scotia by ferry from Maine in 1939. During the same year three additional adults were captured at Yarmouth and three at Lacolle in Southern Quebec.

Since its inception in 1939 the annual trapping program appears to have been quite effective in detecting infestations. Treatment programs have been unable to completely eliminate this pest from Canada.

Turf is the most favoured host of the larval stage of this pest but the roots of other plants are also attacked. Adults are heavy feeders, attacking both foliage and fruit of more than 250 host plants. The following is a partial list of plants severely injured by the Japanese beetle: elm, maple, grape vine, peach, apple, apricot, cherry, plum, rose, zinnia, corn, asparagus, soybean, blueberries, raspberries and blackberries. 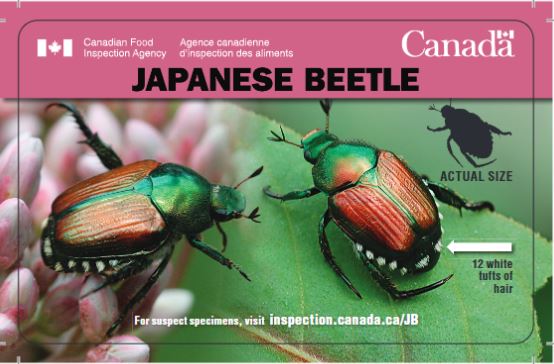 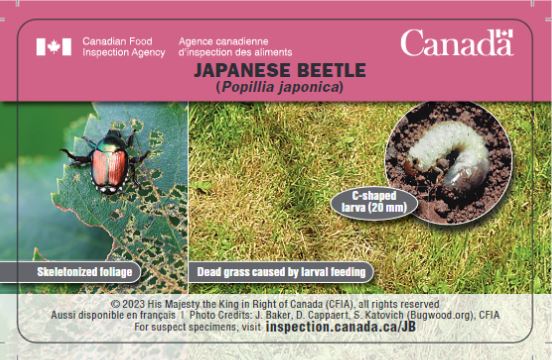 There is only one generation per year. Adults appear in summer and are very active for about 6 to 8 weeks. In the Niagara area they begin to emerge from the soil in late June or early July, but do not reach their peak until late July and August, then gradually disappear. Their normal life span is from 30 to 45 days. They feed on fruit and foliage of a great variety of plants. Beetles begin flying when the temperature is about 21°C. Their flight is aimless except in response to chemical stimuli of food plants or sex pheromone. Most flights are short distances, but the beetle is capable of flying up to 8 kilometres with the wind.

Feeding is most extensive on clear summer days when the temperature is between 21°C and 35°C, and the Relative Humidity is above 60%. There is little feeding on cloudy and windy days and no feeding on rainy days.

Beetles prefer to feed on plants exposed to the direct rays of the sun, beginning at the top, regardless of height, and working downward. They feed on the upper surface of the foliage of most plants, chewing the tissue between the veins, leaving a lace-like skeleton. During the first week to 10 days after emergence feeding is confined to low growing plants, then progresses to fruit and shade trees. As leaves on trees become less attractive, the beetles leave the trees and become more abundant on flowers or in field crops such as, corn and clover.

The female deposits up to 60 eggs about 8 cm deep in soil of lawns and other grassy areas.

Eggs hatch in about two weeks and the small larvae begin to feed on grass roots. Feeding continues until the approach of cold weather. They spend the winter from 5 to 31 centimetres below the surface and resume feeding in the spring. There are three larval stages or instars. Most pass the winter in the 3rd instar. When full grown, they pupate and after a resting period of about two weeks emerge as adult beetles in late June or early July.

On foliage of most plants the adult beetles chew the tissue between the veins, skeletonizing the leaf. On plants with thin leaves and on certain flowers, the beetles chew out large irregularly shaped portions.

Plants with thick tough foliage are usually free from attacks, but some light feeding can occur on the upper leaf surface of such plants. Severely injured leaves soon turn brown and drop. Larvae feed on the roots of a wide range of plants but turf is the most severely attacked. If there are more than 90 grubs per square meter, the damage will appear as patches of dead brown grass.

Larva: A typical C-shaped creamy white grub with a yellowish-brown head. Less than 25 millimetres in length at maturity; occurring in the fibrous root zone of host plants. The V-shaped arrangement of the last two rows of spines on the last body segment distinguishes this grub from all others (Figures 2 and 3).

Pupa: About the same size as the adult and somewhat resembling the adult except that the legs, antennae and wings are closely folded to the body. The body, which at first is a pale cream colour, gradually becomes tan and finally the metallic green of the adult. The pupae are found about 5-8 centimetres beneath the soil surface (Figure 4).

Adult: Oval outline from above, almost 10 millimetres long and 6 millimetres wide, abdomen, thorax and head metallic green with metallic copper-brown wing coverings and contrasting white tufts of hair along the sides and rear of the abdomen, active on warm sunny days from late June to late summer (in southern Ontario) (Figure 5).