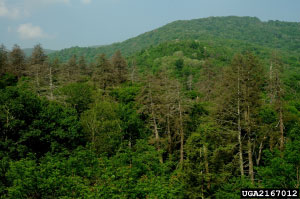 Hemlock woolly adelgid is an aphid-like insect that attacks and kills hemlock trees. Its egg sacs, which look like cotton balls or clumps of snow, can be found at the base of needles. It can be spread by wind, animals and human movement of nursery stock, logs, firewood and other wood products.

Hemlock woolly adelgid was first reported in Canada in British Columbia in the 1920s and in the United States (Virginia) in the 1950s and has been establishing itself along the eastern coast of the United States. In 2017 it was detected in southwestern Nova Scotia. As part of the 2019 detection survey for hemlock woolly adelgid, the Canadian Food Inspection Agency (CFIA) confirmed the presence of this insect in a forested area along the Niagara River near Niagara Falls, Ontario, where it was previously confirmed between 2013 and 2015. It was also confirmed in an area in Wainfleet and Fort Erie, Ontario and most recently has been confirmed in Pelham, Ontario. Survey activities for this pest are ongoing to determine the extent of its spread and to foster early detection in other areas.