The zigzag elm sawfly, Aproceros leucopoda Takeuchi, 1939, is an insect pest that feeds on elms (Ulmus spp.) during its larval stages and can cause severe defoliation damage. It is an invasive species that reproduces parthenogenetically and can produce up to 4 generations per year in temperate regions of the world. Feeding larvae are usually present in each of the growing season months (May to September).

The zigzag sawfly is well adapted to overwinter in temperate deciduous forests.

The elm zigzag sawfly was reported for the first time in North America in Sainte-Martine, Québec, in July 2020 by a citizen scientist who reported it on iNaturalist.ca. In August 2020, the Canadian Food Inspection Agency (CFIA) confirmed the presence of the elm zigzag sawfly in Québec.

Aproceros leucopoda feeds exclusively on elms (Ulmus spp.). It is generally found in temperate deciduous forests where it can successfully overwinter. Urban environments provide suitable hosts of all ages.

Asia: It is distributed throughout various parts of Asia, specifically parts of China (Gansu) and Japan (Hokkaido; Honshu).

Europe: It has been introduced and spreading in Europe.

North America: The elm zigzag sawfly was confirmed in the province of Québec, in August 2020. The source of this introduction is unknown. It is the only known established area in North America.

The life cycle of Aproceros leucopoda is multivoltine (multiple generations that span one year) with an overwintering pupal stage. This sawfly is an outbreak species as it is parthenogenetic and can produce up to 6 generations per year. Adults generally occur from mid-April to mid-September. Larvae are usually found from late May to mid-October. One generation can develop in about 24 to 29 days.

Aproceros leucopoda is parthenogenetic and no males are known to exist. Adult females are present during the summer months and they live from 1 to 6 days. Females commence egg laying immediately after emergence and lay about 7 to 49 eggs. Eggs are laid singly into the serrated leaf margin. After 4 to 8 days larvae hatch and feed on leaves leaving a typical zigzag feeding channel on the leaf underside (figure 1). As larvae grow and develop they completely consume the entire leaf, except for the leaf mid-rib (figure 2). Larvae develop through 6 larval instars which are usually completed in 15 to 18 days.

The pre-pupal or eonymph stage loosely spins a cocoon and attaches itself to some structure such as the underside of the leaf, a twig or shoot, or anything underneath the tree. Pupation occurs in 2 to 3 days with adults emerging 4 to 7 days later. Two types of cocoons, light summer net-like cocoons and dense cocoons, are produced throughout the spring and summer (figure 3). The denser cocoons generally overwinter in the duff layer on the ground and adults emerge the following year. This adaptive life strategy allows this insect to rapidly build up populations and successfully overwinter each year.

The elm zigzag sawfly is a leaf eater causing defoliation that can attack elm hosts at any age or stage of development. Heavy attacks may induce crown die-back through severe defoliation of branches. New growth after complete defoliation can be attacked by the next generation, leading to general weakening of the tree. Trees in isolation (roadsides, fields) seem to be more frequently attacked and harmed.

Elm leaf eating with conspicuous zigzag cut channels from the leaf edge inwards is characteristic of early-stage feeding damage caused by Aproceros leucopoda (figure 4). As the larva matures, it turns around and eats toward the leaf edge, obliterating the zig-zag appearance, but leaves the leaf mid-rib intact. Upper crown die-back of branches is indicative of severe defoliation activity by the zigzag elm sawfly.

Eggs are tiny and blue-green, turning black before hatching, and are attached to the leaf margin right at the tip of each tooth. They are 0.8 to 1.0 mm long and 0.4 to 0.5 mm wide and are difficult to detect.

On hatching, larvae are grayish-white, 1.8 mm long, 0.3 mm wide. Mature larvae are green, 10 to 11 mm long, head capsule 1.4 to 1.5 mm wide and green with one black band at each side. The body is green, with black spots around the breathing openings and with one triangular black spot on the upper back of the 2nd and 3rd body segments.

Mature larvae pupate in either loosely-woven cocoons that resemble a rigid net affixed to the bottom of leaves, or more solid, dense cocoons in which they overwinter, often in the leaf litter or soil.

Adults are tiny overall shiny black wasps with typical sawfly appearances (that is, no "wasp waist") (figure 5). Their body length is 6 to 7 mm. The upper lip (clypeus) is dark brown, and the thorax is dirty yellow to brown. The bottom of the thorax has a white patch, the legs are yellow ending in white tarsi and the wings are smoky brown.

Aproceros leucopoda is a strong flier and can disperse locally. It is known to move by human-assisted means via plants for planting and hitch-hiking. Cocoons can be found on twigs and leaves, larvae or pupae may be associated with roots and soil.

At this time, raising public awareness of the risk of moving infested elm material is essential to help control and limit the spread of A. leucopoda in Canada. Elm trees can be infested with all life stages of the sawfly. Maintaining tree vigour and health, and a diversity of tree species (that is, avoiding monocultures) is one of the best methods to reduce and control infestations of A. leucopoda.

To help determine the extent of its distribution, the CFIA is encouraging the public and all stakeholders to submit samples of any suspect pests they observe on elm trees to their local CFIA office. Suspect sightings can also be reported online. This information will assist in evaluating the extent of the infested area and the threat posed by this pest and will help direct the next steps for Canada. 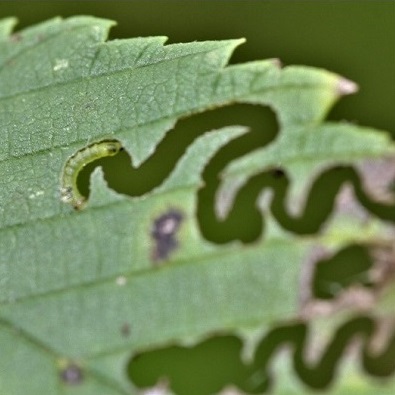 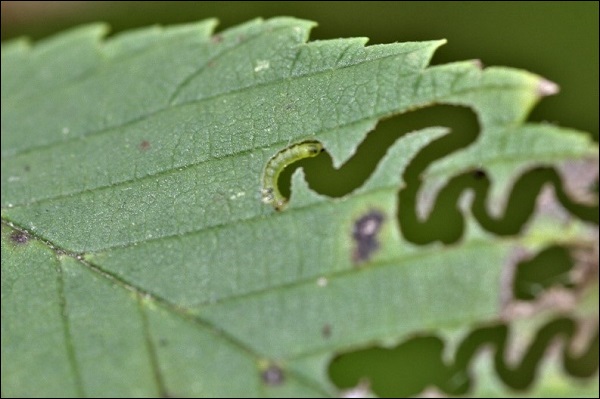 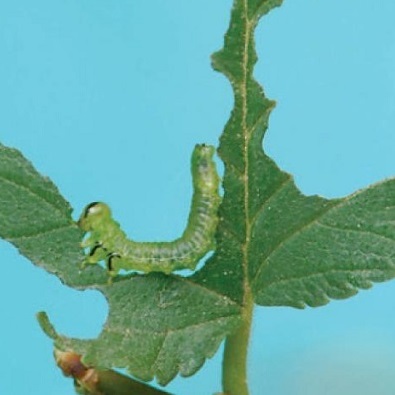 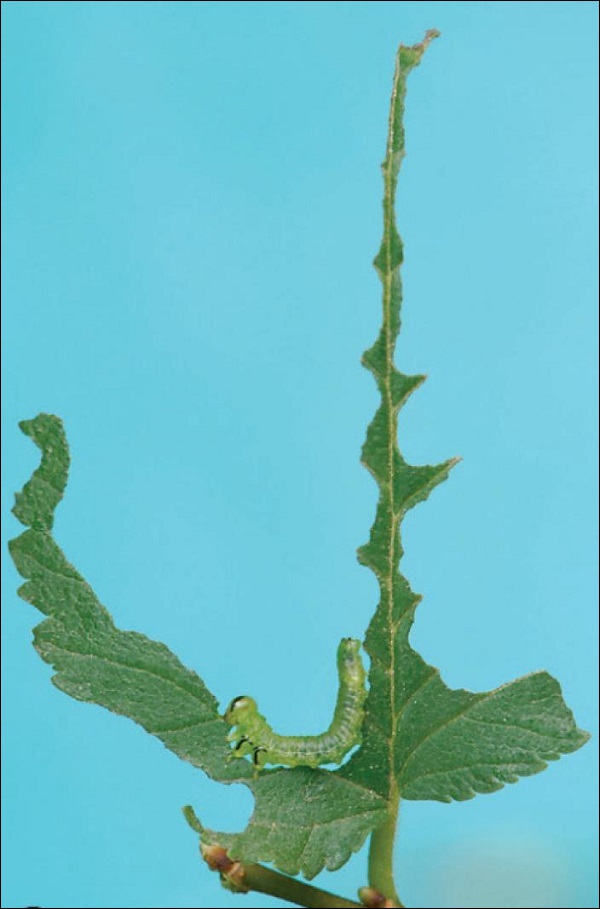 Figure 2. As larvae grow and develop they completely consume the entire leaf, except for the leaf mid-rib. Source: Danail Doychev. 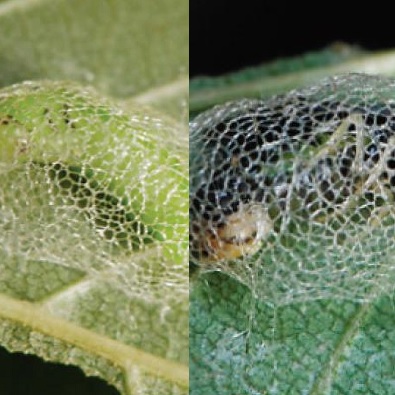 Figure 3. Cocoons of Aproceros leucopoda. On the left, net-like cocoon containing an eonymph. On the right, a cocoon with adult ready to emerge. Source: Danail Doychev. 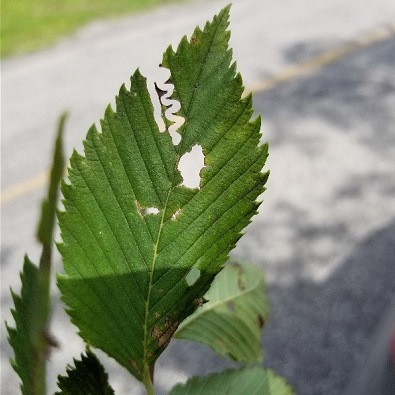 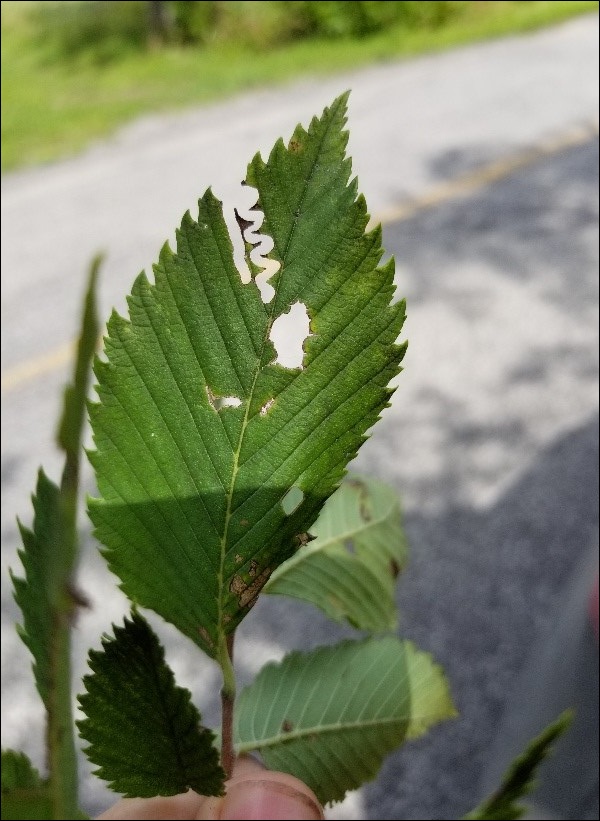 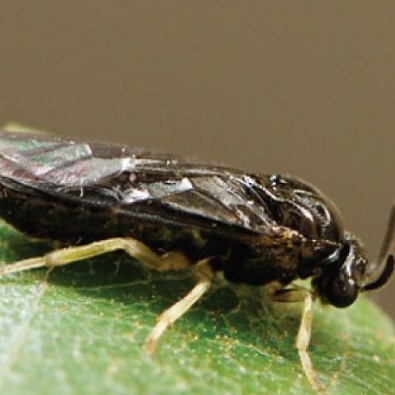 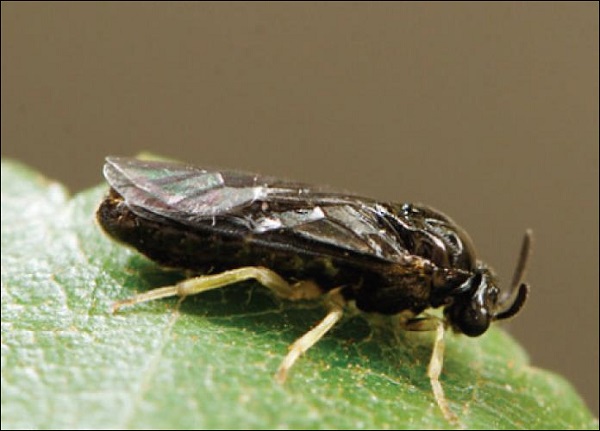