Genotype analysis of the prion gene has been determined to be a significant factor in susceptibility to infection with classical scrapie in sheep. One is most likely to discover the disease in sheep in genotypes with the highest susceptibility (See Table 1 below).

Studies from various geographic areas and different breeds of sheep have found three codons to be most significantly related to susceptibility to classical scrapie: 136, 154, and 171. The genotypes of sheep in Canada are referred to using these codon number and the corresponding two alleles associated with the codon. For example, 136 AV; 154 RR; 171 QR (also referred to as ARQ/VRR in short hand). In North America, codons 136 and 171 are given primary importance in association with susceptibility to classical scrapie.

The profile of the sheep's prion genotype varies among countries, flocks, and breeds. While there is no genotype that confers absolute resistance to scrapie infection, the presence of arginine (R) at codon 171 confers a high level of resistance to classical scrapie. Conversely, the presence of glutamine (Q) at codon 171 is associated with susceptibility.  This is supported by the fact that of all sheep diagnosed with classical scrapie in Canada from 1998–2008, 93% were of the genotype ARQ/ARQ, and over 98% were homozygous 171QQ. Similarly, the majority of classical scrapie cases reported worldwide have been in 171QQ sheep.

Although rare in the Canadian sheep population, histidine (H) or lysine (K) may also be found at codon 171, but both are currently considered equivalent to 171Q in term of susceptibility. The valine (V) amino acid at codon 136, confers greater susceptibility among the 171QR population. Table 1 summarizes the relative susceptibility of sheep genotypes to classical scrapie.

The knowledge of genetic resistance to classical scrapie has led to the implementation of breeding programs in several countries that are aimed at reducing national flock susceptibility. Although the heavy promotion of the use of 171RR rams across Canada may be effective in minimizing the spread of scrapie, it would also result in a significant change in the genotype profile of the national flock. Currently, Canada's sheep population demographics show considerable variation in scrapie genotype profiles between breeds and flocks.

Breeding for scrapie resistance is an effective disease control tool that may be applied by owners. To date, the selection for resistant scrapie genotypes has not been associated with negative production traits.

The CFIA is currently work towards the incorporation of the use of genetic resistance alleles S146 and K222 in goats in our Canada's domestic National Scrapie Eradication Program (NSEP). This is consistent with our trading partners, the United States (US) and the European Union (EU). Internationally, other scrapie-affected countries (including the US) with eradication programs have started to use in their domestic programs.

Samples taken for genotyping for the purposes of the National Scrapie Flock Certification Program (SFCP) or for export the U.S. must be taken by an accredited veterinarian. Approved identifiers are required on sheep being genotyped and the official identification number (15 digits) included with the sample submission. 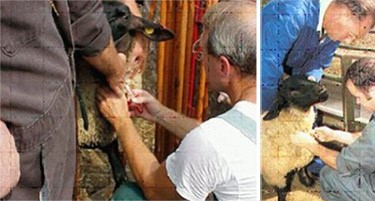 To facilitate the rapid collection of blood samples from multiple sheep in as little time as possible, it is suggested to not waste time upending the sheep. Restrain sheep for venipuncture in a standing position.

Occlude thoracic inlet, palpate or approximate the location of the jugular vein, and insert Vacutainer needle.

A single-use needle is required for each animal, to prevent cross-contamination of DNA.

Collect a full 7-10 ml of blood in an ethylenediaminetetraacetate (EDTA) tube (lilac or purple top).

Make sure that the sample and individual animal identification are irrefutably connected.

Samples should be stored at 4°C until shipped. Ship to laboratory as soon as possible.

Module 3.2 of this manual proves detailed instructions on the packaging, shipping and submission of serological samples.

Samples collected under the Scrapie Flock Certification Program should be submitted to a lab listed in Annex G of Module 7.5 of this manual.

Samples collected in support of export to the US, should be submitted to the National Veterinary Services Laboratory (NVSL) or another laboratory designated by NVSL to verify genotype. Select "Ovine PrP Genotyping" at the link below to access lab information.

Genotype analysis may be performed on tissues other than whole blood provided that the approved lab has been evaluated and approved for testing of the type of tissue submitted (for example, skin biopsy). It is the responsibility of the accredited veterinarian to confirm what tissue testing is offered under the approved lab's scope of duties.