Although it is uncommon, fresh produce may harbor pests that pose a threat to consumers. For instance, on rare occasions, consumers have unknowingly carried black widow spiders into their kitchens in bunches of imported grapes. Scorpions have been known to hide in bunches of bananas or imported berries. There have also been isolated incidents of iron cross blister beetles found in imported leafy green vegetables.

When shopping for produce, it is important to visually inspect the product for pests.

At home, the following precautions should also be taken:

Black widow spiders are distinctive due to their shiny round body, brown or black colour and two reddish or yellowish triangles forming an hourglass on the underside of the abdomen. The legs are long and slender. The black widow spider may bite in self-defence if physically disturbed. The spider's venom is poisonous and bites should be treated properly and promptly. Children and adults who are not in good physical health should take particular care. They should not interact with these spiders and take extra precautions to avoid being bitten.

Black widow spiders are occasionally found in imported table grapes, especially those imported from California during the fall harvesting season. Spiders have always been in and around grape vineyards. They eat insect pests that are found on grapes. The presence of spiders does not damage or poison the grapes. When grapes are harvested, they are carefully examined before being placed into a package. However, some spiders may camouflage with the grape vines and escape the attention of the farm worker. Refrigeration of the product prior to being transported reduces the spiders' activity, making them harder to detect.

In most cases the symptoms of a black widow spider bite are a sharp pain followed by localized swelling and redness. In some cases severe symptoms may appear within 30 to 60 minutes. These symptoms may include muscle cramps and spasms, chills, fever, nausea, headache, hypertension, and abdomen or chest pain.

Characteristics: Black shiny body, about 6-13 mm long with a red hourglass shaped mark on the underside of the abdomen.

Note: Most spiders are not aggressive unless disturbed. All species of black widow are venomous.

Scorpions in bananas and berries

There are nearly 2,000 species of scorpion in the world with a wide variation in size and other physical qualities. However, there are several defining characteristics shared by all scorpions; four pairs of legs, a pair of strong pincers, segmented body and a long, segmented tail. Normally, the last segment at the tip of a scorpion's tail is the largest and can deliver a painful sting. In most species, the tail is thick and long, often curling up over the body of the scorpion. All known species of scorpion are venomous, however, the type of venom and degree of toxicity varies from species to species.

Scorpions are nocturnal predators, hiding during the day. When a product is harvested, scorpions may be gathered along with the produce. They are most common in warmer arid habitats but are also found in rain forests and grassy prairies.

Most often, a scorpion sting may cause local pain, redness, tingling or numbness, burning and swelling similar to a bee sting. For these symptoms, wash the area with soap and water, then apply a cold compress to reduce pain and swelling. In more serious cases, symptoms can include dizziness, blurred vision, difficulty focussing eyes and swallowing, swollen tongue, drooling, random eye movements and muscle twitching. If these symptoms are present, immediate medical attention should be sought. 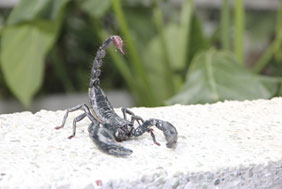 Characteristics: Four pairs of legs, a pair of strong pincers, a segmented body and (typically) a long, segmented tail.

Note: All species are venomous, but few have venom that is potentially lethal to people.

Habitat: Every continent but Antarctica. Typically found in warm arid regions but may also be found in tropical rainforests, grassy prairies, and warm temperate woodlands.

Food: Insects, spiders, other scorpions and small animals such as mice or lizards.

The iron cross blister beetle is distinctive due to its colouring. The bright red head and bright yellow markings on the elytra are separated by a black "cross." Blister beetles release an irritating chemical called "cantharidin" in self-defence, if threatened or crushed during food handling. When released, cantharidin may cause burning blisters at the point of contact with the body surface. If handling of the bug cannot be avoided, gloves should be worn.

Iron cross blister beetles have been found in imported leafy vegetables (e.g. pre-packaged salad mixes) from the southern United States. Insects are common at produce farms and most are removed when vegetables are examined during harvesting and processing (e.g. sorting and washing). Insects on leafy greens may become inactive during refrigerated storage and become active once brought to room temperature by retailers and consumers.

The defensive compound produced by blister beetles causes severe blisters to humans when skin contact is made. It is also toxic to mammals if ingested, causing illness, and has been known to cause death of livestock if consumed in a large enough quantity. 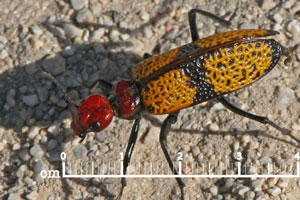 Characteristics: The adult beetle is up to 3.8 centimeters (1.5 inches) long. Its head and thorax are a bright red/orange colour and its abdomen is yellow and black.

Note: The bright colouration of this beetle warns of its danger. When disturbed by handling or by a predator, blister beetles release the toxic defense compound cantharidin.

Habitat: Most warm regions of eastern and central U.S., and North American deserts.

Food: Blister beetles eat the leaves and flowers of many types of agricultural plants, including lettuce, beet greens and alfalfa.