Fruit and vegetables that produce cyanide

Cyanogenic glycoside toxin is also found in the cassava root and fresh bamboo shoots, making it necessary for them to be cooked before canning or eating. Cassava is classified into two main types - sweet and bitter. Sweet cassava is defined as having a concentration of cyanide less than 50 mg per kilogram of fresh weight, while bitter cassava has a concentration greater than 50 mg per kilogram. The sweet cassava only requires cooking in order to reduce the cyanide content to non-toxic levels. However, the bitter cassava contains more toxins and should be prepared and cooked properly prior to consumption. Grating the root and prolonged soaking of the gratings in water will leach out the cyanide, reducing the levels of toxin. In addition to soaking, cooking will further detoxify the roots before consumption.

Cyanogenic glycoside found in fresh bamboo decomposes quickly when placed in boiling water, rendering the bamboo shoots safe for consumption. It has been found that boiling bamboo shoots for 20 minutes at 98 C removes nearly 70 percent of the cyanide, while higher temperatures and longer intervals remove up to 96 percent. The highest concentrations are detoxified by cooking for two hours. 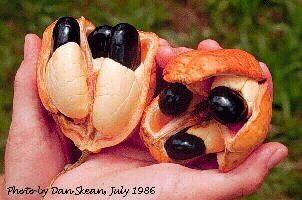 Ackee, akee or achee - Blinghia sapida - is a food staple in many Western Africa, Jamaican and Carribean diets. There are two main varieties, hard and soft ackees, that are available for consumption. Both canned and fresh forms of this fruit are consumed. However, unripe fruit contains natural toxins called hypoglycin that can cause serious health effects. The only part of this fruit that is edible, is the properly harvested and prepared ripe golden flesh around the shiny black seeds. The fruit is poisonous unless ripe and after being opened naturally on the tree.

Potatoes that can cause burning sensations

Several different glycoalkaloids are produced naturally by potatoes, the most common being solanine and chaconine. Low levels of glycoalkaloids produce desirable flavour in potatoes. However, exposure to elevated levels of glycoalkaloids when eating potatoes can cause a bitter taste or a burning sensation in the mouth - indicating a state of toxicity. Glycoalkaloids are not destroyed by cooking; even by frying in hot oil. The majority of this natural toxin found in potatoes is in the peel, or just below the peel. Greening of the potatoes may be indicative of the presence of the toxin. Red skinned or russet potatoes may camouflage the greening.

Consumers should avoid eating potatoes that show signs of greening, physical damage, rotting or sprouting. Potatoes should be stored in a cool, dark, dry place at home, such as a basement, and away from the sun or artificial light. Wash potatoes before cooking and peel or cut away green areas prior to cooking. Potatoes with pronounced greening or damage should be discarded. If potatoes taste bitter or cause a burning sensation after cooking, do not consume them.

There have been documented reports of poisoning from consuming raw or undercooked fiddleheads. Symptoms usually begin 30 minutes to 12 hours subsequent to consumption and may include diarrhea, nausea, vomiting, abdominal cramps and headaches. Illness generally lasts less than 24 hours. Studies to date have not determined the cause of these illnesses. More information on Fiddleheads is available from Health Canada.

Fresh fiddleheads must be carefully washed in several changes of cold water. They should then be thoroughly cooked, either through steaming for 10 to 12 minutes - until tender - or in boiling water for at least 15 minutes. Water used for boiling or steaming fiddleheads should be discarded. Fiddleheads should also be boiled or steamed prior to sauteing, frying or baking.

Off-flavours such as a bitter taste, aftertaste and/or petroleum-like flavour have been associated with the consumption of fresh carrots. In contrast to sweet flavour, these off-flavours are usually as a result of stored carrots being exposed to ethylene. Ethylene is a normal fruit ripening hormone that may react with natural chemical compounds found in carrots creating off-flavour sensory attributes. Thus, carrots should not be stored with ethylene-producing commodities such as apples, avocados, bananas, pears, peaches, plums, cantaloupes, honeydew melons and tomatoes. Carrots properly handled and stored in perforated plastic bags at a low temperature retain the most acceptable taste.