Origin & Breeding History: 'Bumper' was developed by pedigree selection from the simple cross of the lines DAHBI_6 and ARDI_TOPO1419//ERIZO_9 made in 1993 at the Centro Internacional de Mejoramiento de Maiz y Trigo (CIMMYT), El Batan station, Mexico. The F1 was sown, selected and harvested in bulk in Oregon during the winter-spring 1993-94. A single F2 plant was selected and threshed individually to produce F3 seed. This process was repeated at various locations for the F3 to F7 generations at which time it was considered to be a stable line. During the winter-spring seasons of 1997-2000, the line was yield tested and multiplied. In 2002, it was included in the 40th International Triticale Screening Nursery grown near Swift Current, Saskatachewan in a paired row plot where it was selected for further testing due to its large kernel size, high yield and test weight. From 2003 and 2007, it was further evaluated in the Triticale 'A' and 'B' tests and the Western Spring Triticale Co-operative Test as T196.

Tests & Trials: Trials for 'Bumper' were conducted during the summers of 2009 and 2010 at the Agriculure and Agri-Food Canada, Lethbridge Research Centre, Lethbridge, Alberta. Each plot was replicated 4 times and seeded at a rate of 1600 seeds/plot. Plots consisted of 4 rows, planted 3.0 metres in length with a row spacing of 23 cm. Measured characteristics were based on a minimum of 30 measurements.

Length of awns above tip of spike (cm) 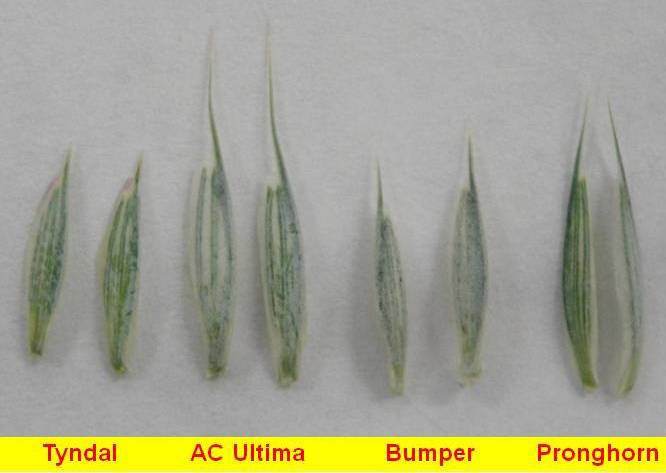