Summary: The density of hairiness/pubescence on the stem above and below the upper culm node of 'AAC Justice' is medium whereas it is very sparse on 'HiFi'.

CULM: medium hairiness on stem above and below upper node

Origin & Breeding History: 'AAC Justice' (experimental designations OT2084, 06Mn25-AP1 and 10RAT26) was derived from the cross ND020965/SA050100 conducted in the greenhouses at the University of Minnesota, St. Paul, Minnesota during the winter of 2006. The F2 seed was grown in the field in Minnesota during the summer of 2006. F3 seed was produced in the winter nursery near Palmerston North, New Zealand in 2006-2007 from which twenty-eight F4 lines were selected and planted in the rust/smut nursery of the Cereal Research Centre (CRC) of Agriculture and Agri-Food Canada, Glenlea, Manitoba during the 2007 growing season. Eighteen lines were selected for advancement to the winter nursery in New Zealand during the winter of 2007-2008. Twelve superior F6 lines were selected for resistance to oat crown and stem rust plus tolerance to barley yellow dwarf virus (BYDV) and were grown out in the 2008 Glenlea Rust/Smut Nursery. Twenty-two lines were again selected for superior disease resistance, agronomic performance and quality characteristics and increased in the 2008-09 winter nursery grown near Palmerston North, New Zealand. Three lines were selected from this nursery and tested in single replicate preliminary yield trials grown in Manitoba and Alberta in 2009 and in replicated trials grown at 9 sites across western Canada during the summer of 2010. Two of these lines were entered into the 2011 and 2012 Western Cooperative Oat Registration Test as OT2083 and OT2084, and were evaluated for disease resistance, quality traits and agronomic perfomance.

Tests & Trials: Tests and trials for 'AAC Justice' were conducted at Agriculture and Agri-Food Canada's plots located at the Manitoba Crop Development Centre in Portage la Prairie, Manitoba, during the summers of 2012 and 2013. The size of the plots was 3.25 square metres and consisted of 5 experimental rows with 2 winter wheat guard/border rows. Each row was 4.27 metres long and the rows were spaced 15.24 cm apart. The varieties were planted in 4 replications with an approximate plant density of 1200 plants per variety per plot. 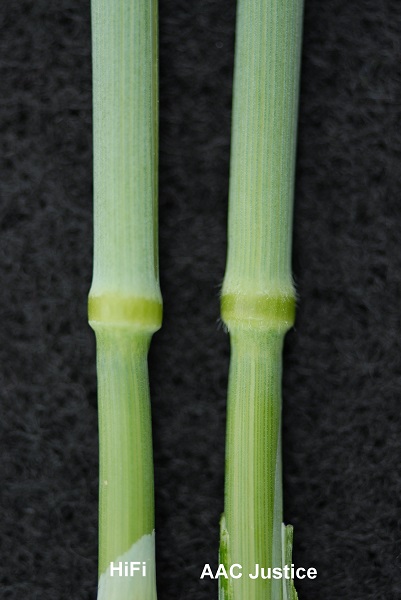