Origin & Breeding History: 'Kiegador' was developed from a cross between a light rose coloured Agastache line designated 97-0988 and a dark salmon coloured line designated 97-0026 made in 2001 in Venhuizen, The Netherlands. The F1 seedlings were grown in 2001 and the new variety was selected for its improved floral and foliage colour. Additional evaluation criteria for the new variety were plant vigor and health, reliable propagation and cutting stability.

Tests & Trials: Trials for 'Kiegador' were conducted during the summer of 2006 in Oxford Station, Ontario. Trials consisted of 15 plants of each variety grown in 15 cm pots in a polyhouse. Plants were spaced 45 cm apart. Observations and measurements were taken from 10 plants of each variety. All colour measurements were made using the 2001 Royal Horticultural Society (RHS) Colour Chart. 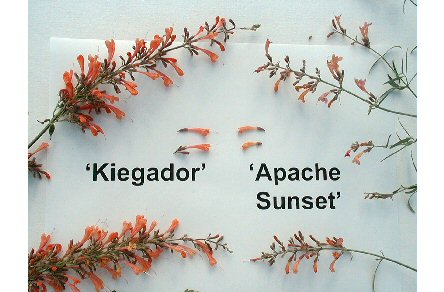