LEAF BLADE: outward attitude in relation to shoot, medium length to width ratio, medium green on upper side, incisions of margin on distal half are serrate type 1, medium density of pubescence on lower side
PETIOLE: small to medium extent of anthocyanin colouration from base

FLOWER: dark pink on outer side at balloon stage, medium size diameter when petals pressed into horizontal position, arrangement of petals is intermediate between not touching and overlapping, stigmas positioned below anthers

Origin & Breeding History: 'Delfloga' originated from a controlled pollination conducted in 1983 in Malicorne (Allier), France between the variety 'Tenroy', as the female parent, and the variety 'Florina', as the male parent. 'Delfloga' was selected in 1998 for its resistance to scab (Venturia inaequalis), good fruit preservation for 5 to 6 months at normal cold temperatures, and good productivity.

Tests & Trials: The comparative trial of 'Delfloga' was conducted in 2015 in an orchard at Pépinière Rochon, inc., at 9026, rang de la Fresnière, in Mirabel, Quebec. The trial was planted in 2013 and included 13 trees of the candidate variety and 5 trees of the reference variety which were grafted onto rootstock variety 'M7'. The grafting took place during the winter of 2011 after which the grafted rootstocks were grown for 2 growing seasons in a nursery. In the autumn of 2012, the candidate and reference varieties were uprooted from the nursery and planted at the trial site in the spring of 2013. The trees were planted 1.5 metres apart in rows that were spaced 4.5 metres apart from each other. Observations and measurements were taken from 5 plants, or parts of plants, of the candidate and reference variety.

Length of the internode on the one-year-old shoot (cm) 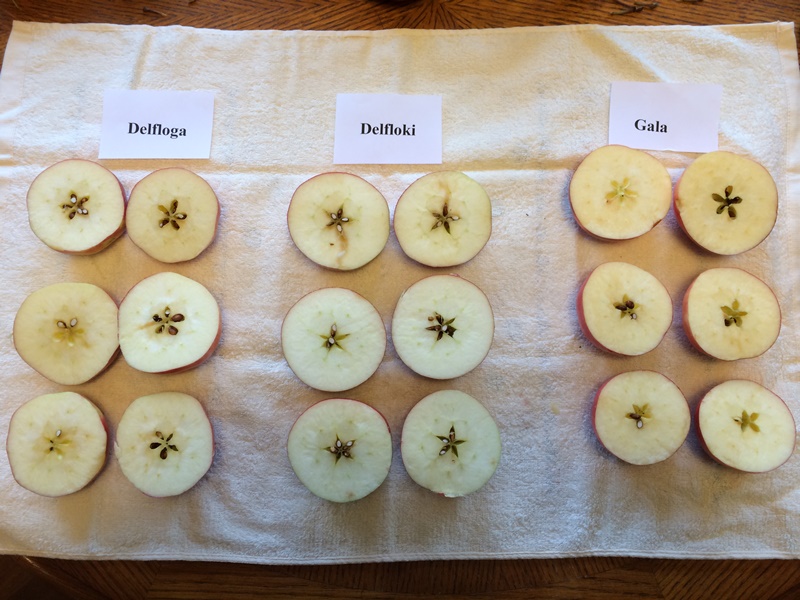