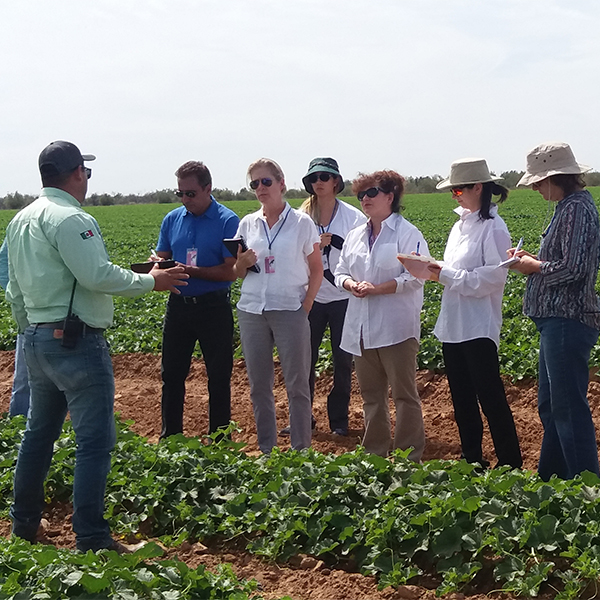 Cilantro: love it or loathe it?

Canadians enjoy a wide variety of fresh fruits and vegetables from around the world thanks to countries with warmer climates that provide these products year-round. When it comes to fresh coriander, also known as cilantro, much of what is imported into Canada comes from Mexico, Canada's second largest source of imported fresh fruits and vegetables after the United States.

Leafy greens are often the subject of food recalls, so how does the Canadian Food Inspection Agency (CFIA) help make sure that imported food like cilantro is safe to eat?

This is a story about how a small team of CFIA experts collaborated with Mexican authorities to establish new import requirements for this leafy (albeit polarizing) green.

Setting priorities based on risk

The CFIA created the Offshore Food Safety Program (OFSP) in 2016 to focus on imported food, allowing the Agency to proactively prevent non-compliant products from entering Canada.

The CFIA doesn't work alone when it comes to safety of imported food products. The Agency considers data and information from Health Canada and the Public Health Agency of Canada to decide which products should be on its radar.

It also considers the volume of imports from a country, the types of products imported, Canada's regulatory requirements under the Safe Food for Canadians Regulations (SFCR), the history of non-compliance, food recalls and environmental scanning data.

In late 2016, the foreign food safety systems team received information from Mexico about their food safety system. A list of produce including fruits, vegetables and leafy greens (like cilantro) was created and became the focus of a joint effort with Mexican authorities to ensure that systems are in place in Mexico to allow these products to consistently meet applicable Canadian food safety requirements.

In 2017, four CFIA experts went the extra mile – literally – to do their job. They visited seven Mexican states in ten days to conduct on-site assessments of various food safety controls to determine if Canadian requirements were met. It was also an opportunity for Mexican authorities to learn about Canada's proposed new requirements for fresh fruits, vegetables and leafy greens under the SFCR.

As part of the mission, the CFIA team learned about Mexico's system for the Reduction of Contamination Risks (SRRC) developed by the National Agro-Alimentary Health, Safety and Quality Service (SENASICA) of the United Mexican States. Under this voluntary program, Mexican producers and packers of fresh produce must meet certain requirements for good agricultural practices and food safety.

Successful missions depend on solid working relationships with Canada's trading partners. "The colleagues in Mexico were very receptive, cooperative and adjusted our itinerary to make sure that we had the full picture," says Valeriya Staykova, lead on the mission for CFIA. "Through this level of engagement they were able to develop and implement additional preventative control measures, including monitoring food safety practices of primary production and packing facilities."

Upon returning to Canada, the CFIA team analyzed the information obtained during the mission. With the support of colleagues in Mexico, they published a final On-site Assessment Report.

Following each mission, the Food Imports team within the Agency uses assessment results to further analyze the level of oversight for foods exported to Canada and to determine whether additional import controls are required. After the mission to Mexico, their analysis culminated in Import requirements for Mexican fresh coriander (cilantro).

As of April 2019, fresh cilantro can be exported to Canada if growers and packers are certified by the Mexican government under the SRRC. This means the next time you purchase cilantro from Mexico, you can be confident that it meets Canadian food safety requirements.

Although COVID-19 has curtailed any further missions at this time, under the OFSP, the Agency continues to collaborate with other countries in two key areas:

The OFSP is part of the CFIA's broader pre-border risk management approach. Learn more about the Agency's plans to proactively address food safety issues before they reach Canada.

Wonder what it's like to work in the OFSP? In 2018, Laurence Dionne-Wilson received a President's National Award for her analytical work and coordinating missions with foreign trade partners.